I went to Hobby Lobby two weeks ago and they were having a sale on their simplicity patterns for $1.99 each (reg. $15.00) so I bought one thinking I MIGHT like to sew again. I have not sewn since I chose to sew Caleb's baby bedding before he was born. I think I over did it a bit and got burned out too quickly trying to complete such a big task for a beginner, even though I did have some help from my mom. My mom bought me a new singer sewing machine while I was making Caleb's bedding and it has been taken out once or twice for various projects but I really haven't used it much. I lost the instruction manual a few years ago and didn't even know how to thread my bobbin. I got online back in January and I found an online PDF to download for $15.oo and I bought it and it was SO worth it! I have a feeling I will be sewing a lot now...it's great therapy!

Anyway, back to the pattern...
I bought a pattern to make an apron for Ariel. I got the facric on sale for $2.00 for half a yard and only ended up using half of that. I got my bias tape on sale and I also got the ribbon that I used for an accent on sale as well. I think I spent less than $5.00 on the whole thing. Caleb and Ariel got invited Trinity Fox's birthday party at Jump Zone tonight so I decided to give the apron to her for her birthday. It was SO much fun to make once I got the hang of it. I think I did a pretty good job considering I hadn't sewn with a pattern in nearly 5 years! It took me all morning to make but I was on the phone a lot and had to get up quite a bit with Ariel since she was needing attention. I am going to try to make another one with the left over fabric that I have for Ariel either tomorrow or Thursday since Caleb is at school.
My model was a little chilly and didn't want to be outside! 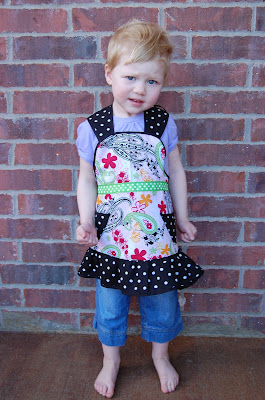 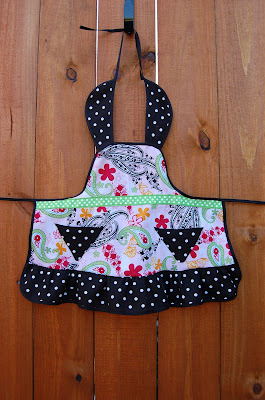 By the way...I am selling these for $22.00 each and I can make them any color you want...I even have a pattern for boys!

Super cute! Now you need to rack up on the 99 cent patterns for clothes for Ariel. I have them all but...not many finished pieces. : )

when you start selling these, i want one!!!

SO cute! You did such a great job; that doesn't look like an easy apron either! You're not going to believe this, but I made a skirt, t-shirt & headband for Kyla out of that same fabric a while back...the pink one, but I used a different black print from that same line for the contrasting print. I thought it was too cute......