10 Years Since He Proposed! 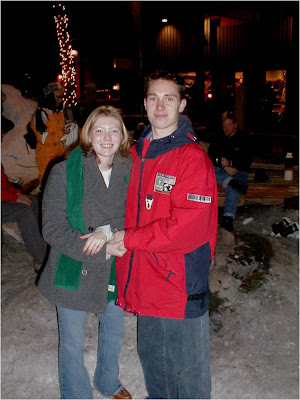 On January 6th, Dan and I marked 10 years since he proposed!  What a special day that was!  Here is how he proposed!

He and I had taken a trip to Colorado to see my mom and my dad in 2001.  They were both living out there at the time and I wanted to see them during Christmas so we left a few days after New Years.  Dan was about to leave to study abroad in England with the Landscape Architecture program at the U of A for 4 months.  At that time we had been together for two years and I had told him that I wasn't sure how I would make it through the 4 months knowing that he wasn't fully committed to me.  We talked long and hard about getting engaged but he assured me that there was no way he was going to be able to propose before England.  I was crushed and didn't know what to think but just decided to let time pass and see what happened.  Little did I know that he had already had the ring bought and sitting in his parent's safe at their house months before he was even proposing!

So, we get to Colorado and he keeps telling me not to touch this little red gift bag that he had packed in the truck.  I just thought that it was just a Christmas present that he hadn't given me yet and was going to wait until we got to my mom's to open it.  We went to my dad's house first for a few days.  I remember that we had gone to a Christian Bookstore and my dad wanted to get me a new Message Bible so he sent me in to get it.  Right at that moment is when Dan asked my Dad for my hand in marriage!  A few days later, we went to my mom's house.  Dan and I planned one evening to go ice skating and before hand he asked my mom to come into the bedroom to show her the gift that he had gotten me.  He showed her what was in the red gift bag and it was a bible that he got for me that had "Katie Cole" written on the front (my new name!!).  And then he showed her the ring and asked for her blessing.  My mom came out of the bedroom wiping away tears.  At this point I still had no clue what was going on.  I really did just think that it was just a Christmas gift.

Dan and I get in the truck and head to Keystone which is about 15 minutes away.  He wasn't acting weird or anything but he did want to make sure he had the camera and he wanted to make sure he had a stocking hat to keep his head warm.  That kinda struck me as odd because he had never worn one before but I went with it.  He really didn't want the stocking hat to wear he wanted it in his pocket so while we were skating I wouldn't feel the ring box in his pocket!  So we skated for a while.  I have to be honest, I really dislike ice skating.  I hate being cold and the skates are always so uncomfortable and I can't ever stay vertical in skates.  Needless to say, I sat down on a bench in the middle of the lake quite a few times.  He asked me to skate with him to the hockey area so I get up and start skating with him.  Then, he just takes off and leaves me in the middle of the lake.  Then I see him turn around and come skating back to me.  As he gets closer, he slides down on one knee and kneels before me.  He reaches in his pocket and pulls the stocking hat out and when he does, the ring falls to the ice.  My hands automatically got up to my face and he asked me to marry him.  I say "No Way!!"  I kept saying "No, No, No" as in I can't believe this happening, but Dan kept looking at me thinking that I was actually saying "No" to the question!  I snapped out of it and finally said "Yes" and then I dropped to my knees on the ice and we just hugged as I cried!  After that, we skated around the lake a little while longer and all I could do was stare at my beautiful ring.  We had the picture taken above at the fire ring on the ice by a guy who had just recently proposed to his girlfriend as well.  It was truly a magical moment for me!  He did good!