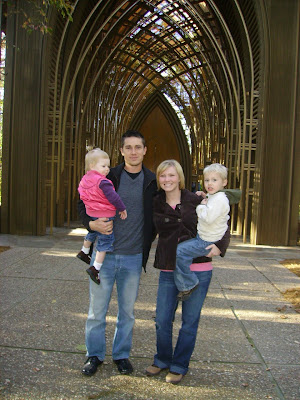 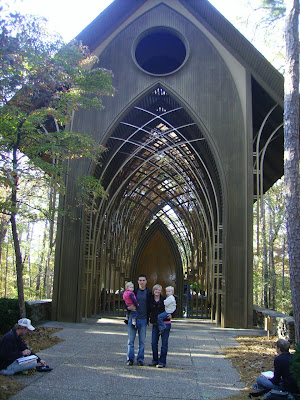 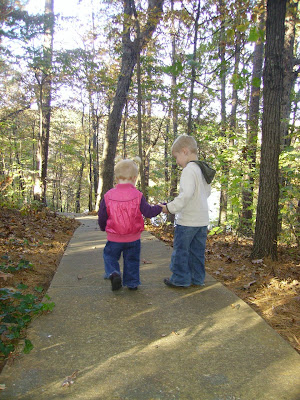 On our anniversary, Dan and I took the kids to Cooper Chapel where we exchanged wedding vows 7 years ago. When we drove up, we noticed that there were 3 or 4 white cargo vans from Iowa State. We weren't sure if it was ok to walk up to the chapel or not be we decided to at least get out and check it out anyway. As we got closer to the chapel there were college students all sitting on the ground with sketch books in their laps. Some of them even had their cameras out and they were taking pictures of the outside of the chapel. There was a sidewalk that went off and around the chapel so we thought that we would take it instead of intruding on the students. I said to Dan as we were going off the main sidewalk, "They must be design students." Dan and I should know what a design student looks like since we were both in design school for four plus years! Before we got off the main sidewalk, we were stopped by the main professor that told us that we would not intrude on them if we wanted to go inside. I asked him if they were design students and he said that they were Landscape Architect Students from Iowa State. Of course that is when Dan chimed in and told the professor that he was a graduated from the U of A with Landscape Architecture and that he was starting his own business...and yada yada.

Dan and I thought that it was pretty ironic that there would be design students at one of our favorite places in Arkansas, and on the day that we were married. It was obviously pretty special to the professor too because as we were going into the chapel, he introduced us to his 40 plus students that were in there. He told them that we were married in the chapel 7 years ago that day and were there to show our two kids where it all started!