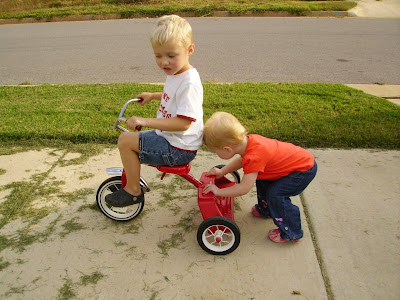 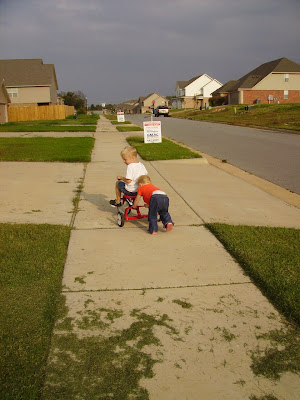 My sweet friend Mandy Bean let Ariel borrow her daughter Ainsley's tricycle. I brought it home and Ariel got on it and Caleb started pushing her in it. Well of course Caleb had to try the trike out as well, so he got on and Ariel automatically starts to push him. I just thought it looked kinda funny with her pushing him on a trike.

Dan took these in his parent's hammock this past weekend. I wish I would have at least had some make-up on but oh well! 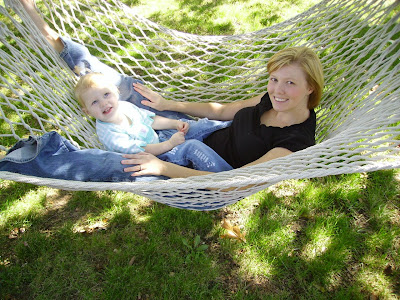 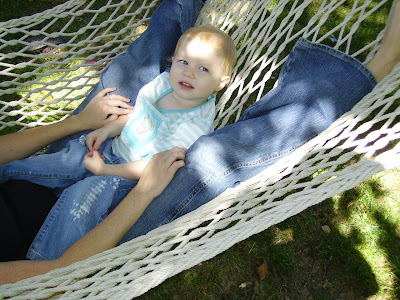 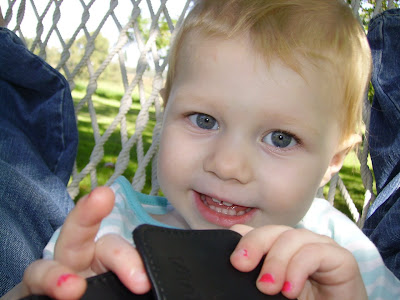 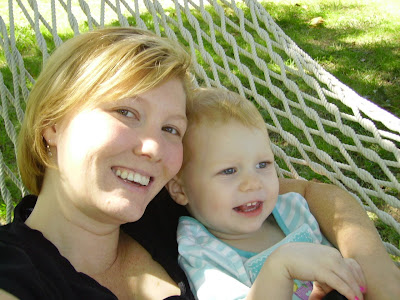 A Night at the Fair

Last Friday night, we went to Harrison to see Dan's parents and to go to the county fair. They have an awesome fair with lots of animals and rides. It is much better than the Benton and Washington County Fair combined. We had a blast.
Caleb rode on the Helicopter with another little boy who's name was Caleb as well. Our Caleb covered his ears the whole time...not sure why, I guess he though it was loud! 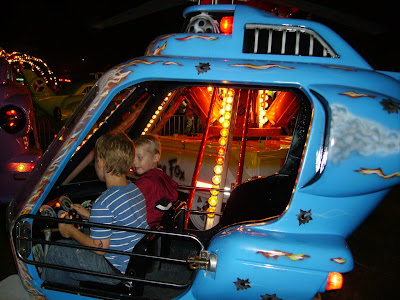 Ariel rode on Daddy's shoulders for a little while so that she could see all the bright lights. 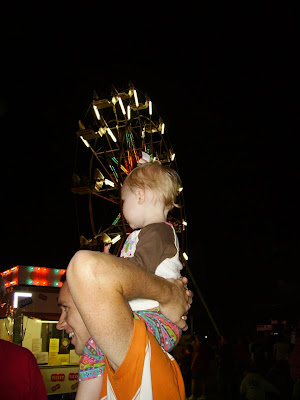 The carousel was Ariel's favorite ride. She wanted to ride on the monkey instead of the horse! 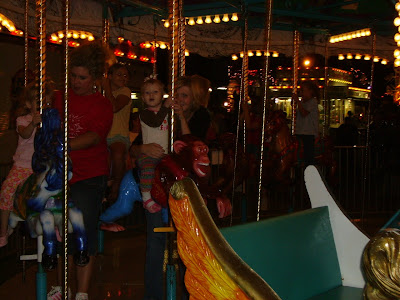 Dan's parents and the kids on the ground when Dan and I were in the Ferris Wheel. 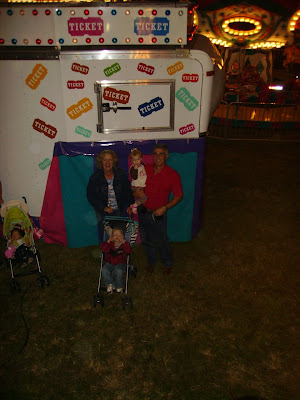 The view of the whole fair from the Ferris Wheel. 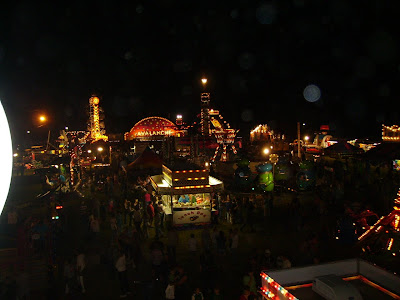 Brother and Sister on the four wheeler together. 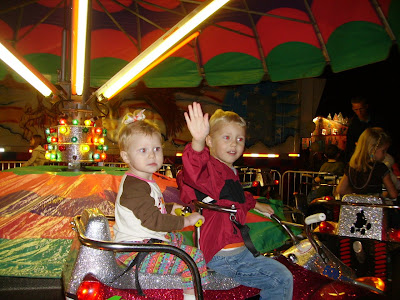 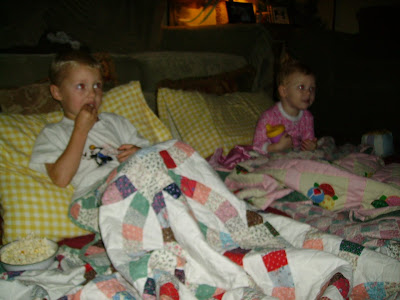 Dan has been working on Saturday evenings delivering pizza so I thought that I would start Movie Night with the kids on those nights that he has to work. We take advantage of the Redbox movies at Wal-Mart and eat a bag of popcorn while we lay on pallets of blankets on the living room floor. The kids love it. So far we have seen Nanny McPhee and Alvin and the Chipmunks.

The Bible is God's Word 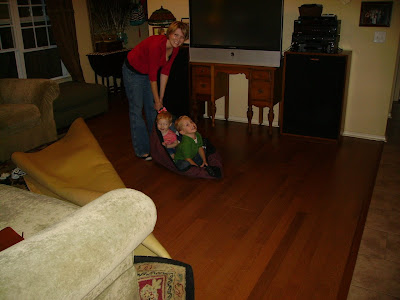 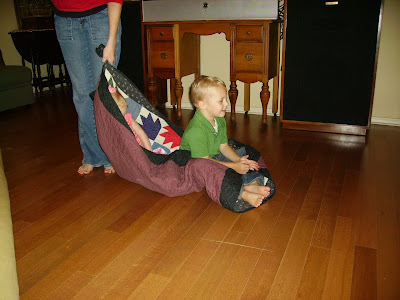 A couple nights ago, I got the idea to pull both kids in a blanket on the floor...they absolutley loved it! We will definitly have to remember to do that again when it gets cold outside! 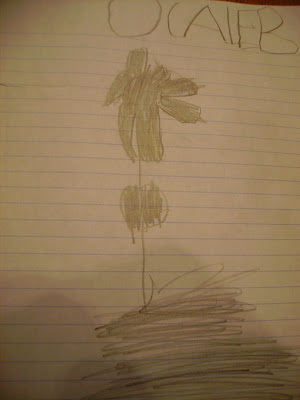 Caleb drew me this flower a couple weeks ago and thought I would share. He is so artistic! The "O" in front of his name at the top is the sun.

It is crazy how life catches up with you and you realize that three weeks have gone by and you don't even realize it. Sorry to all the faithful readers but I am sure that you all know that life throws things at you that you can't control and you lose track of time!

The past few weeks have almost been a blur. As most of you know, I have huge anxiety toward throwing up. It is something that satan uses against me. I have been put on anti-anxiety medication over the last few years every fall and winter in order for me to "cope" a little more since I fear that my kids, Dan or I will get a stomach bug and my anxiety will sky rocket. I have faith that I will be healed from this and that God is just trying to get my attention to let go and let him get me through the rough patches in life rather than trying to take control on my own. That being said, Ariel ended up throwing up for the first time ever two weeks ago. I had not started my anti-anxiety medication yet, so even though I was calm on the outside, I was screaming in fear on the inside. I am thankful to God that she only threw up twice and that it didn't get passed to anyone else in the house, but for two weeks now I have feared that the "bug" will flare up again or that we will catch another form of it. I am on my medication and it is helping but the anxiety is still there. A lot of you who read this are probably thinking, "why are you so scared to throw up?" I can't answer that because I know that it is not a life or death thing but I just can't take it. It would be like someone freaking out over spiders or blood, mine just happens to be throwing up.

I would really like for you all to pray that God will bind satan from me and take this anxiety away. I believe in the power of prayer and know that God will heal me from this.

There are other factors that add into my anxiety, especially right now. Dan is working hard trying to get us out of the little bit of debt we have left. He is working for a residential contractor and or doing drafting work for local landscape architects on Monday, Wednesday and Friday. On Tuesdays and Thursdays he is a TA at the university for a Landscape Construction class until 1:00 and then he does stuff for his company on those afternoons. And to top it off, he has picked up another side job delivering pizzas about 3 nights a week. We are learning to ration toilet paper and bread in our house since we aren't always certain where the next little bit of money will come in. Dan is also teaching a two hour course at church on Wednesday nights on Dave Ramsey's Financial Peace University and sometimes has to go to campus in Fayetteville to help his students in his class that he is teaching until midnight. Plus we are still doing connection group at our house on Sunday nights.

Wow, didn't think I would share all of that but I need the prayer and appreciate all of you!

The Dancing Prince and Princess 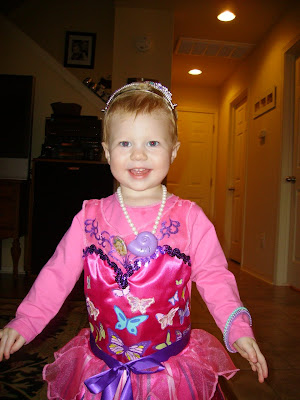 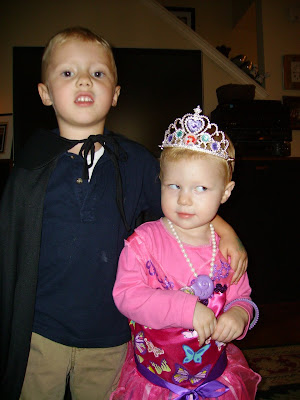 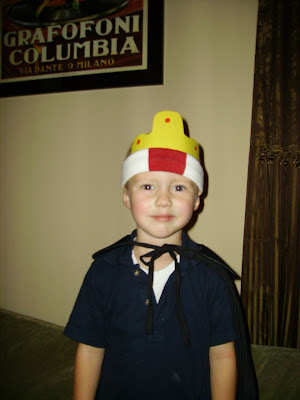 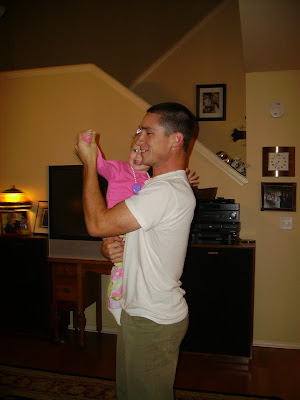 On Thursday evening of last week, Dan and I spent two hours watching the kids dance...well um...we were of course dancing with them, but we all had a blast! We dressed Ariel in her princess dress, with her crown, bracelets, and necklace. And then Caleb wore a vampire cape that he got last halloween from his aunt Amy to use as a prince robe, a sweat band across his forehead with a piece of construction paper for the crown worked perfectly!
The video below is something that I thought I would include. I want to put it to music...we'll see if that happens, but it is cute to watch Caleb dance!

Playing at the Creek 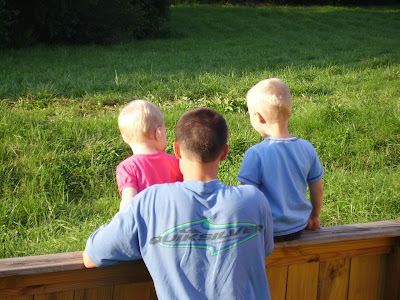 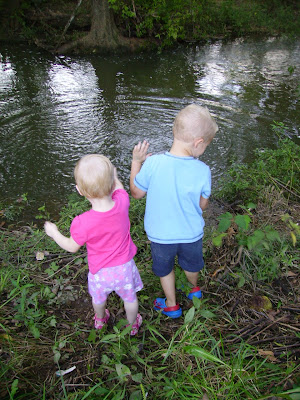 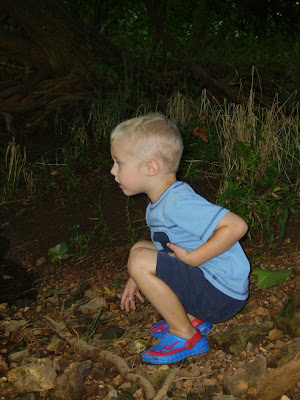 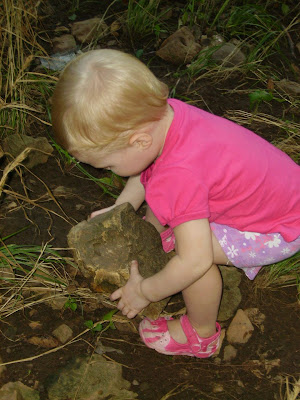 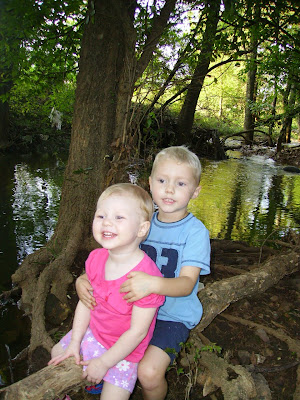 We have a creek behind our house and with thanks to Gustav it has been running pretty steady for the past few days. Dan and I took the kids down there on Saturday evening after dinner to throw rocks and get their feet wet. These are a few pictures that I took.

It's amazing how much my life revolves around the computer these days. I didn't realize it until my computer got sick. I ended up getting a virus on it somehow and I actually ended up having bugs crawling all over my screen at one point...yea...it was BAD!! So, I took the long process of taking all my photos, my digital work, my music and all of my personal files off of my computer and put them on Dan's laptop. Thankfully he got the laptop a few months ago so I was able to put all my stuff there. It was a long process to get everything off, and then it took a while to get everything back on once the computer was reformatted. But I am so glad to have a clean computer. It runs so much better, especially since it is pushing 6 years old. I even gave Caleb his own login page so that he can play all of his games online now without having to ask me to switch from game to game. He thinks that is pretty cool. He says "This is me and mommy's computer now, not Daddy and Ariel's!"