Sorry that it has been a while since I have posted anything. We have been a little under the weather the past few days and there hasn't been many picture moments. Dan, Ariel and I came down with what we think was the flu on Tuesday and since then we have been trying to rest as much as possible. I am still not feeling great but I think it is because I am nursing Ariel and she is taking everything from me and I have been up several times in the middle of the night to make sure Ariel is ok and to calm her coughing so I haven't had a great night's sleep in a few nights. Caleb on the other hand has been feeling great...the same ol little boy that is full of energy (which makes it harder on me when all I want to do is rest!). We got about 3-4 inches of snow on Wednesday and I haven't even taken Caleb out to play in it. I just don't want to risk him getting cold and wet and getting what Dan, Ariel and I had earlier this week.
On Tuesday morning I got the urge to shave Caleb's head. Why I don't know, I guess I was just wanting a new look for him. I got the shears out and was just going to shave up the sides and then leave the top a little longer for spiking but he ended up moving his head and I had to shave it all off. I was a little mad at myself after I did it but now that it has been a few days the change and the shock has worn off. I keep telling myself that it is only hair and it will grow back!
Last week Dan and I made the big purchase of getting a mini van!! Yes a mini van!!! Never thought that I would own one but with having two kids, two car seats, a double stroller and all the other stuff that goes along with our outings, we needed some extra room. We sold our Jeep to some dear friends of ours and took that money and bought an older used van with low mileage. It is a White Chrysler Town and Country Limited. It is really nice and loaded with everything but the kitchen sink...well that and a DVD player which we didn't need anyway! I honestly haven't driven it that much since I haven't been feeling that great and then when we got the snow on Wednesday I knew that I didn't need to get it out. So since it has been parked in the garage I haven't taken any pictures of it yet but I will do that soon!
These pictures were taken this morning. They are so cute when they cuddle in bed together! 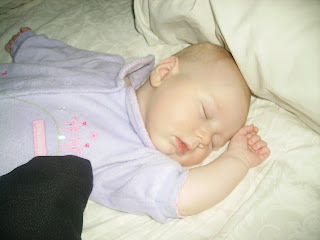 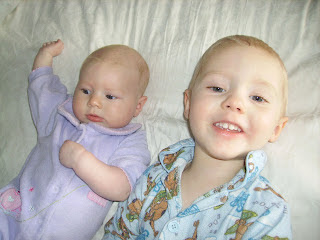 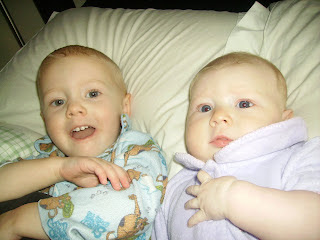 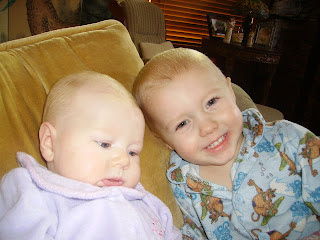 This is Ariel and I before we got sick. 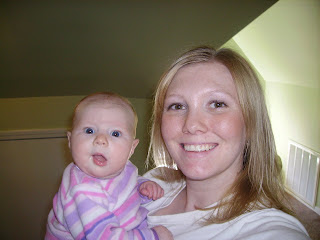 This is Caleb before and after his head shaving! 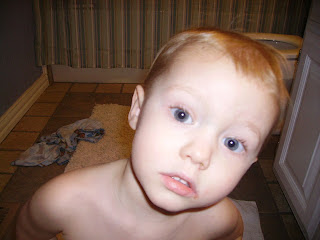 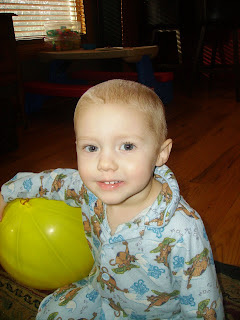