Christmas at the Cole's

On Saturday we went to Harrison to have Christmas Dinner with Dan's parents and family. We had to make it a day trip since Dan is still doing the paper route but we still managed to squeeze in as much family time as possible.

Dan's mom got the kids stockings with their names on them and inside they both got these adorable shirts that have rudolph on them and their noses blink (scroll down to Ariel's video and you will see hers blink)! 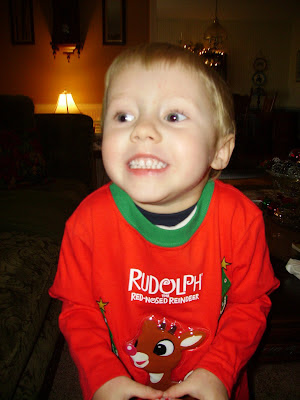 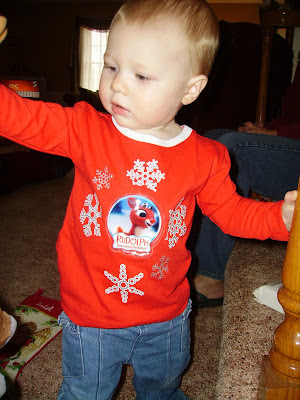 This gift was to Ariel and Caleb but Dan's mom let Ariel open it while Caleb was napping so that she could have some time to play with it while Caleb wasn't around. She got them the Fisher Price Little People Nativity Scene. It included everything including a manger that sings "Away in a Manger." 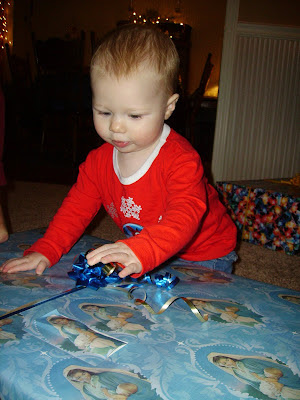 This is Caleb and his guitar...it was a hit! 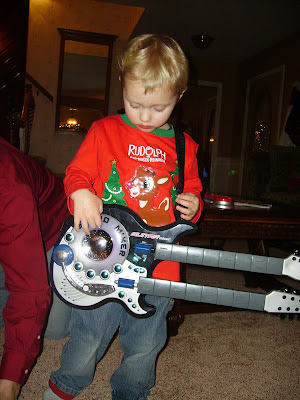 Ariel hadn't had a bottle in nearly two weeks since I am trying to wean her off of it. Dan's mom had one in her cabinet and since her sippy cup was dirty I went ahead and used it. She really enjoyed laying on this pillow and watching tv while sipping on her bottle. 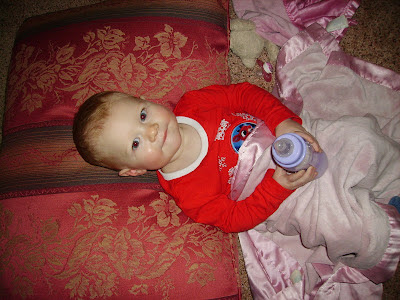 Here is Ariel and I opening up one of her gifts. 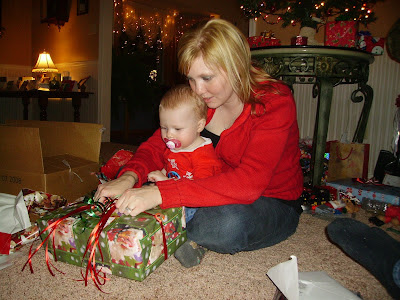 This bag is all Ariel wanted to play with. She would pick up things and put them in the bag and then walk around carrying it all over the place. She is walking like crazy now...that is pretty much all she does now instead of crawling. 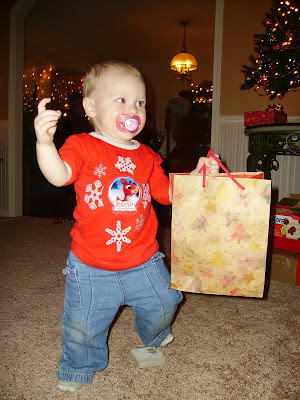 Granny (Dan's mom...she is the one laughing in the video below) and the grandkids 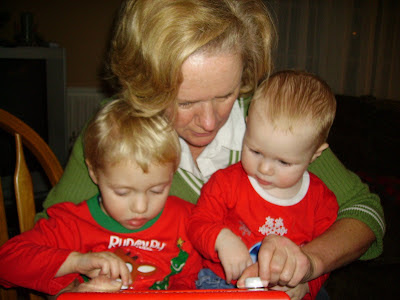 Here is a very dark video of Ariel walking with her sack. We were all laughing because we were saying that she is going to be a great shopping buddy one of these days and just as we said that she took off walking right towards Dan like she was asking for money...already!! (remember you can pause the music below if you want)

I didn't get many pictures of Caleb. He has not been feeling well. He has a terrible cough and he says that his throat hurts. I have been giving him Delsym at night and I have been putting some peppermint essential oil on the bottom of his feet and chest. It seems to reduce the coughing and allows him to sleep. He did get me up a few times last night so that I could spray some cloroceptic (sp?) in his mouth to numb his throat. So needless to say he was not photgenic on Saturday.

Tonight we are going to the Christmas Eve service at church (that is if Caleb ever takes a nap...I put him down nearly 45 minutes ago and he is still not asleep!). Then we will come home and make some cookies for Santa. I can't wait until tomorrow. It gets more fun as the kids get older!